Careem bot has just begun testing with a pilot scheme in Iraq to enable people to book Careem rides via WhatsApp. This is significant and ground-breaking for several reasons.

Ride-hailing is a relatively new concept in many parts of the world, and especially so in Iraq, but WhatsApp penetration throughout the country is as high as 80 percent. By allowing people to book via WhatsApp it simplifies the process, provides an alternative for people who aren’t familiar with ride-hailing apps, and enables Careem to bring improved mobility to millions more people.

Iraq is a low-bandwidth country and internet connectivity is sub-optimal, so booking via WhatsApp uses a lot less of a person’s mobile data. And in Iraq’s cash-heavy market this is a more viable alternative.

Careem estimates that the addressable market of WhatsApp users, within the Iraqi cities in which Careem operates, is around 3.94 million. The pilot will be starting in Baghdad and to begin, it will only work with existing Careem customers who are using their Careem registered phone number, but the service will open up to others in the future.

The way it works largely uses the same underlying architecture as the Careem app.

A customer sends any message to Careem bot via WhatsApp (at +964 783 334 4444) and the bot checks if that phone number is in the Careem database. If it’s not, a WhatsApp message with a link to the Careem website to signup is returned.

Careem bot is able to identify the language of the user and responds in English or Arabic depending on the initial communication. More languages are going to be added in the future.

If the person is already registered, they are asked to share their location using the “send location” feature in WhatsApp. Once shared, the user is then asked to choose the required car type, then this information creates a booking through WhatsApp as opposed to having to book through the Careem app.

The dispatching process uses Careem’s existing application programming interface and nothing actually changes in the back-end process, merely the way the information is taken from the customer.

Once the Captain is dispatched the user gets a message saying the Captain is on the way, and ETA, details of the car make and model as well as the number plate.

At the end of the journey, the passenger can also rate the journey from one-to-five via a WhatsApp message rather than clicking on a star-rating in the app. 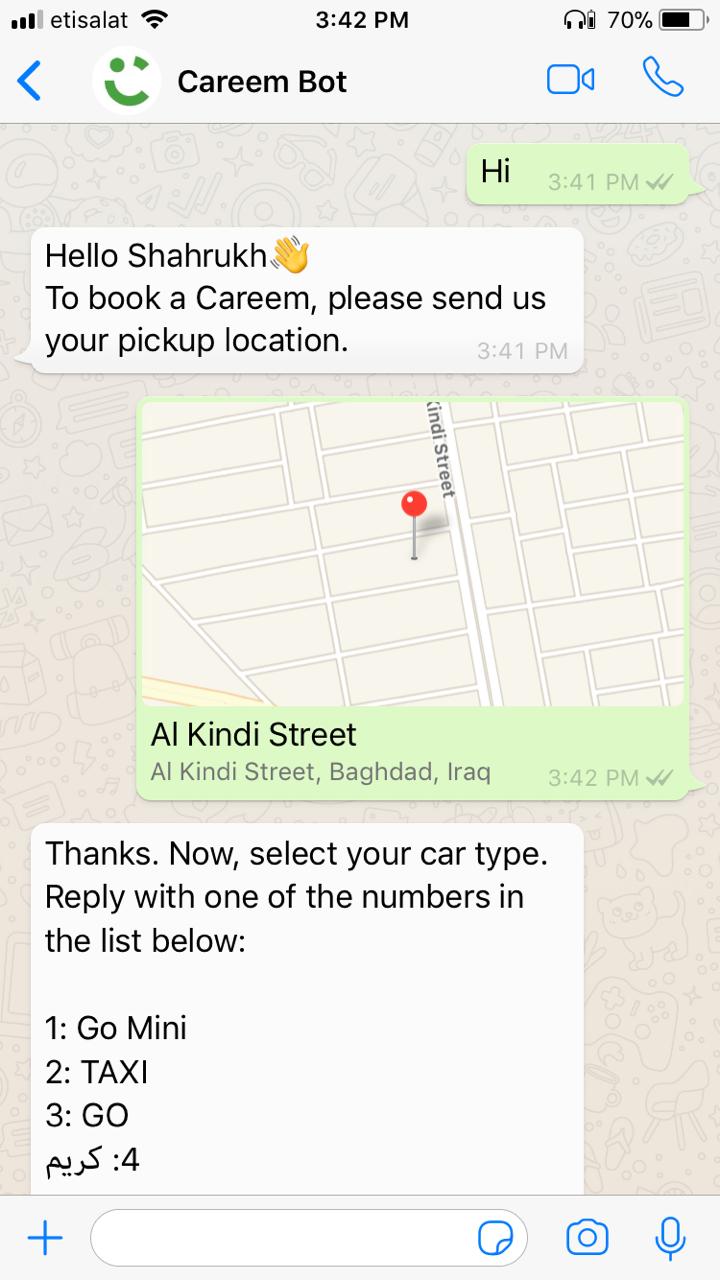 The idea was born out of a Careem overnight-hackathon, and is built by our engineers, product and growth managers on the WhatsApp API. It’s believed that this is the first time a chatbot has been used in this way to book rides, and the potential addressable market is significant.

We’ve always sought to apply specific solutions to specific local problems, whether that’s different modes of transport or ways of operating. We are from the region and Careem is acutely aware that there is no such thing as a one-size-fits-all approach for the Middle East, so we’re always adapting to local needs.

There are around 365 million unique mobile phone subscribers in the MENA region and smartphone ownership – as opposed to regular mobile phones – is predicted to increase from 49 percent to 74 percent by 2025, but this move to enable WhatsApp booking can accelerate the accessibility of ride-hailing for millions of people instantly.

Next Article Careem Tech profile: Engineering under the hood
Careem Bike is back! Read more
Save 20% on three orders with Mastercard Read more