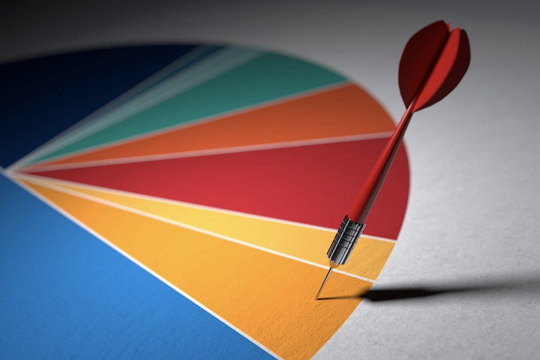 Whether you are deploying a configuration on a canary instance, performing a pilot study of a new application feature to your own colleagues, progressively rolling out a feature to a specific geographical area, or restricting it to only a certain set of VIP users, it all requires some kind of user or traffic segmentation.

In Careem, we needed the ability to support segmentation of traffic dynamically as well as a more challenging task of allowing people to create static segments that contain potentially millions of users and the membership lookup (i.e. checking if a user is part of a segment) of such segments must not take more than a few microseconds. This brings the challenge of not being able to simply call a database since the mere fact of performing a network call would take around 1000+ microseconds (1ms or more).

Generally speaking, segmentation is simply a way of defining a subset of a population-based on some criterion. It usually applies to users but it could be bookings, points of interest, or any other entity. As mentioned above, you can even think of canarying a change on a specific machine as segmentation.

First, let’s conceptualize the problem at hand. Consider an example where a customer has a few attributes. This is normal modelling we go through in software development. We have an entity “User” which has a few attributes (also known as features) and each of them has been valued at a particular point in time. In this example, I have 10$ in my wallet right now but might go for a coffee later and will have less money in 10 minutes. By the time you read this, Roman might be a 60 years old bankrupt user. Every value here is time-dependent and could change. 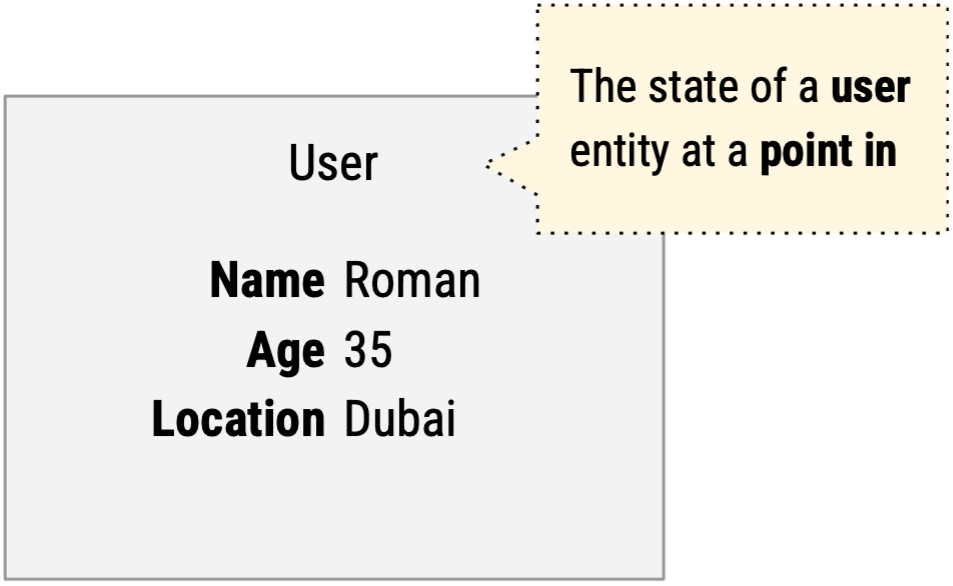 Now, what we call a segment is simply a query around attributes of multiple entities within a collection. For example, a segment of “adults in Dubai” would include a couple of attributes, operators, and values.

In order to provide support for dynamic segmentation, our SDK requires engineers to provide a context (i.e. a map of key/value pairs) for each request and our UI allows end-users to define filtering conditions. Since the SDK is actually executing code, the UI conditions are translated into LUA executable code.

On the other hand, for the static segmentation, our SDK is able to efficiently load sorted, binary-encoded segments (i.e. lists of user IDs) and does a membership lookup using binary search. Such segments are picked up from S3 by the SDK and transparently integrated with Careem’s data warehouse (e.g. Presto, Spark SQL). 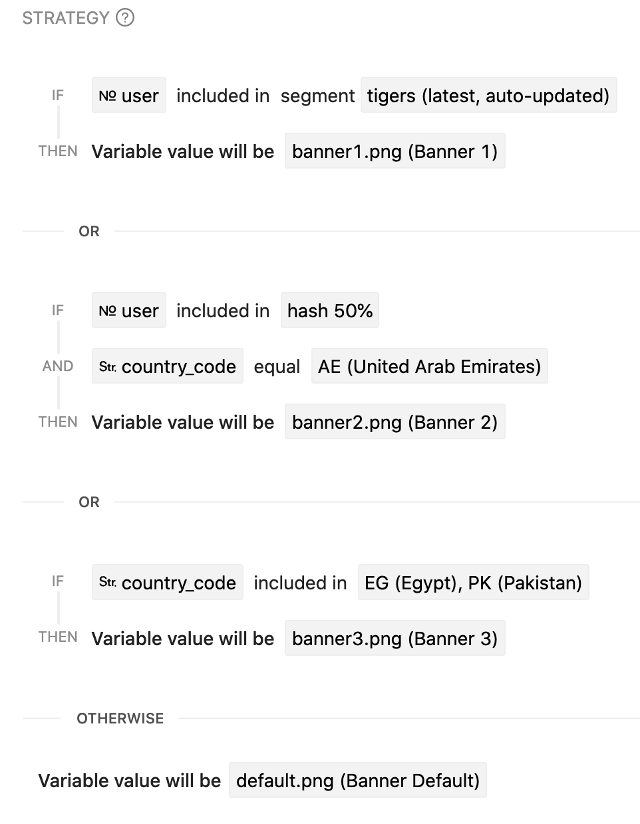 In the image above, you can see how some of these conditions are configured by our users in the web portal, in this specific example, we have a rollout with multiple branches, first of which is a condition that checks if a user belongs to a static segment of “tigers” (our colleagues in Careem). The second branch is a segment of 50% of users in UAE, etc.

In order to support both static and dynamic segmentation in the SDK, we need to have the ability to (a) evaluate the boolean query during the API call efficiently and (b) synchronize large segments of user IDs by shipping them to the SDK efficiently.

The first point is relatively straightforward since our SDK interprets LUA scripts and expression logic is already built. We simply need to generate the code which accepts a dictionary of key/value pairs from the user and generates appropriate if statements.

Now the second point is quite interesting since it requires the SDK to potentially load large files of user IDs. Our target was to be able to configure static segments with several million IDs and we needed to minimize network transfer and memory usage, as these offline segments need to be updated regularly. 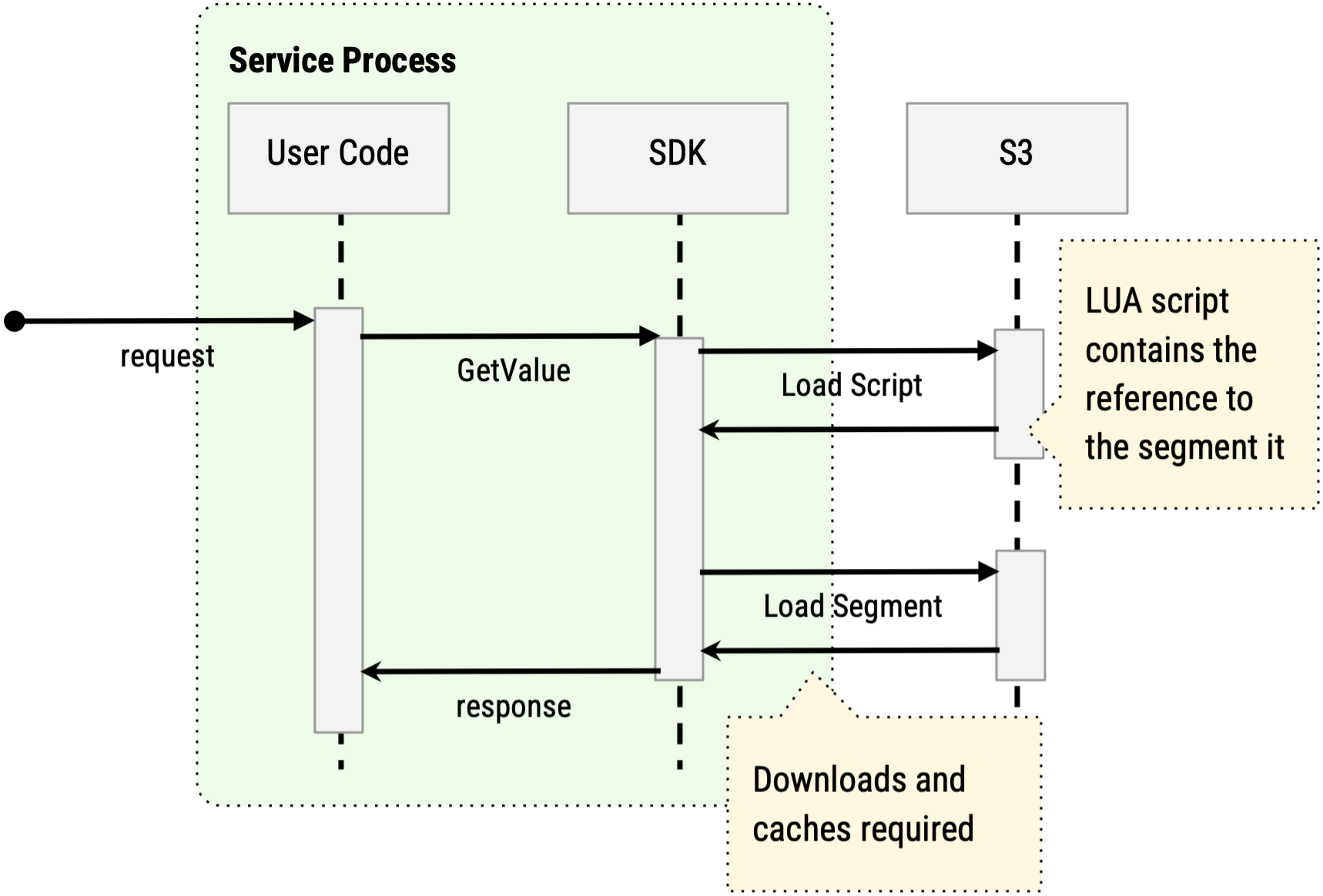 Small static segments (e.g. under 1000 IDs) could be encoded directly in the text and be part of the LUA script itself. On the other hand, large segments will be represented by a file in S3 which the SDK will load/watch similarly to the LUA code itself. In fact, our segments and LUA scripts sit in the same S3 bucket for simplicity.

Now, let’s examine how we encode and perform lookups on large segments. Before we dive into the implementation, we first need to examine the requirements we set ourselves when designing the segment encoding algorithm.

One of the properties of the problem that we can leverage to our advantage is the nature of segments. If we consider all segments by being a simple set of integers, we can employ integer compression techniques such as run-length encoding or a delta encoding.

For our algorithm, we decided to use delta encoding combined with variable-size integer encoding and binary search for membership checks. If we consider a simple example of a segment containing 8 numbers, we can reduce variance by delta encoding, which in the following example. This leaves us with relatively small numbers and using variable-size integer encoding (i.e. ProtoBuf VarInt) we can reduce most of the deltas to a single byte.

If we simply encode a large number of IDs and apply delta encoding, we can efficiently compress the set of integers. However, this would not be efficient to search as to find the Nth element we would require O(N) operations. In order to make sure we can reduce the complexity and be able to check membership using a binary search, we partition our segment into blocks of deltas and create a header that contains the initial pointer as well as the offset allowing us to jump directly.

For example, in the image above we have 2 blocks of deltas and a header. The header itself is a list of values and offsets:

For the bucket size, we currently have a constant 20 deltas size, but it can be made dynamic to accommodate for CPU cache lines.

As you can see, membership check can now be done using a combination of binary search on the header and then a linear search on the block of deltas. Linear search on a small number of elements is relatively fast since the delta calculations happen sequentially and all of the data is very likely to be in the L1-cache.

In order to validate the performance of this simple algorithm, we have implemented this in Go and Java. Below are the results of a benchmark in Go that performs a random membership search performed on segments of random integers. This was executed on an Intel(R) Core(TM) i7-9750H CPU @ 2.60GHz laptop.

Similar numbers were observed during the benchmarks of our Java implementation.

In this article, we have presented a way to tackle both static and dynamic segmentation for client-side dynamic configuration at Careem.

Overall, we have deployed the solution to production and have seen widespread adoption in Careem of both ways of segmenting users. Being able to check segment membership without decoding while not consuming an excessive amount of memory enabled our internal end-users to roll out features and experiment seamlessly without worrying about the segment size.