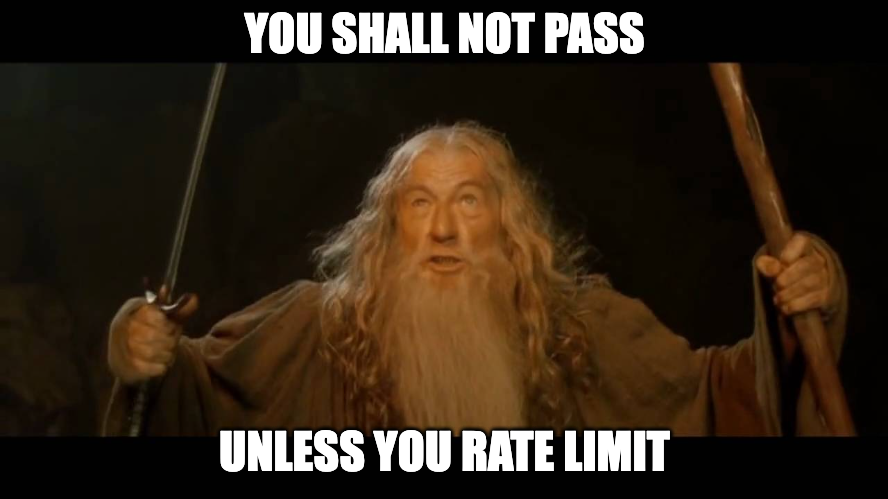 At Careem we encourage everyone to “talk data”. Our tools are built in a way to make data accessible to most colleagues across the company. Our founders have written SQLs themselves to get insights from data. With such broad usage of data systems and very open access, ensuring fair usage of resources has been a challenging task.

Presto, the distributed query engine for big data that uses the SQL query language, became the tool of choice for ad hoc data analysis at Careem. Paired with dashboarding tools, Presto is a valuable platform to quickly analyze data. Many data analysts and data scientists use Jupyter Notebooks consistently to write automated reports and schedule queries. This makes Presto one of the most critical services to serve as a backbone of data access for the majority of our colleagues.

The tussle between bots and humans is not new. Apart from hoarding GPUs and PS5s, unrestricted bots (scripts) can also starve critical resources, in our case Presto. Some teams make heavy use of scripts and directly connect to our Presto clusters. At the start of the week a lot of queries would essentially choke our clusters. Scripts keep retrying but it’s the ad hoc use cases and real user experience that ended up suffering a great deal. The power of scripts needed to be… limited.

Presto service became the culprit of the power of scripts and we urgently need to implement a solution at scale for all the colleagues. Presto is used by multiple stakeholders within Careem in order to get various data points from a combination of data sources. It is considered a critical resource to everyone at Careem. As Presto is being shared across multiple teams and users, the objective is to implement the right allocation and a proper governance. We have had instances in the past as depicted in the above graph where a single user was unintentionally choking a complete cluster by submitting many requests in bursts. Eventually all those repeated requests ended in a queue and all users including the given user faced a considerable delay by not getting results in time. In order to ensure Presto service availability and reliability for all users, we introduced rate limiting features on top of Presto service. Rate limiting feature intercepts each request and makes a binary decision whether to allow or reject  requests to pass through based on limits defined.

Presto is used for query execution by many Careem colleagues in multiple ways. Introduction of  Presto Gateway helps in catering higher load by instantiating multiple Presto clusters behind a Gateway. This will ensure that while we do have multiple clusters, users will have a single endpoint to access Presto and not worry about which cluster query lands to.

We have multiple Presto gateway instances and requests can land on any of the instances based on round robin fashion. 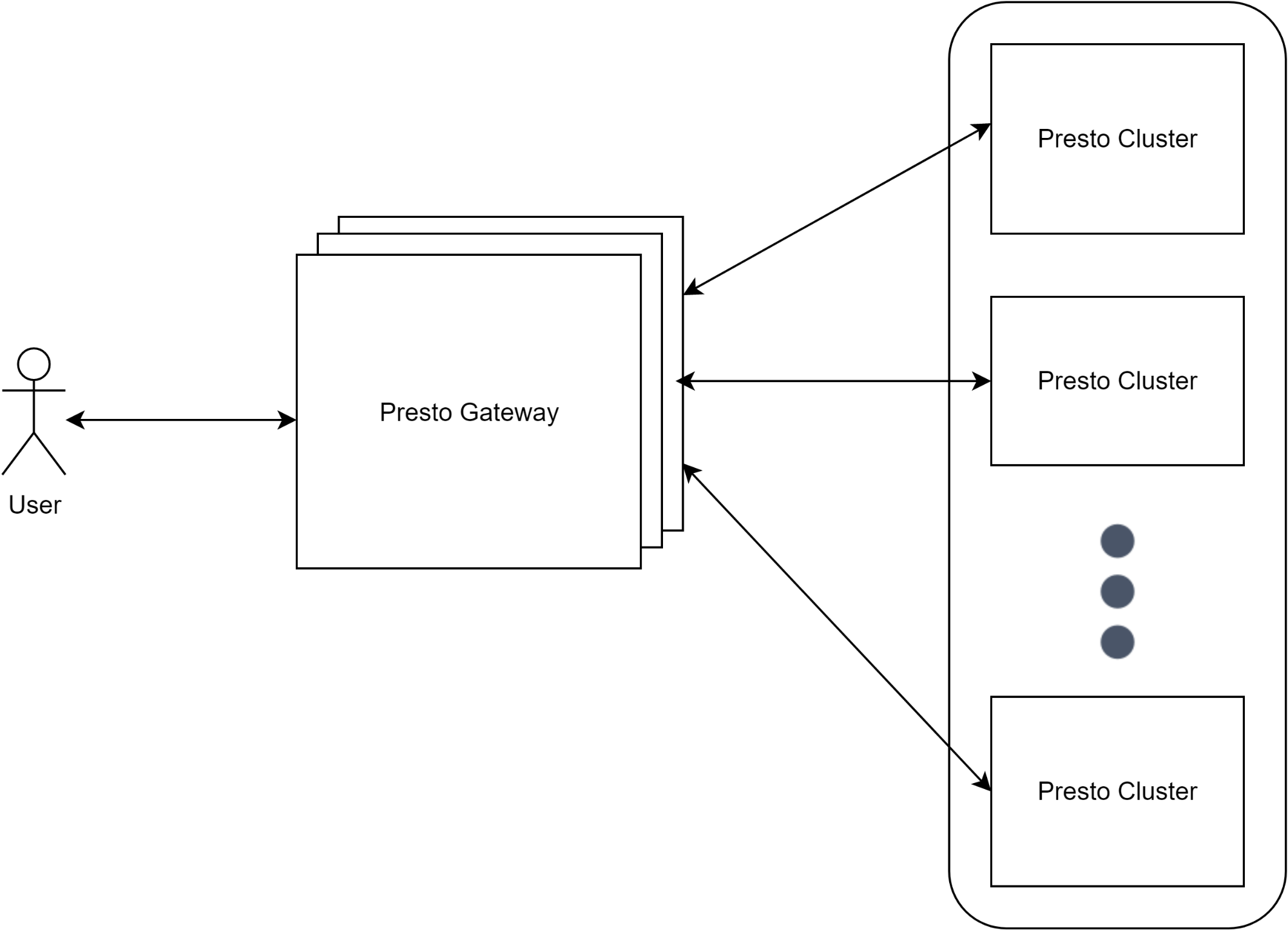 For every passing request, the rate limiting service makes either of the two decisions below:

We have decided to implement a rate limiting service in two steps that will be described in detail in the below sections.

Our perspective is to allow more queries from a user who submits fast queries versus a user with slow queries which consume resources for longer duration in a given time frame. We then implemented an additional filter which specifically monitors already submitted queries and ensures the user has no more than k concurrent queries present in a Presto cluster. 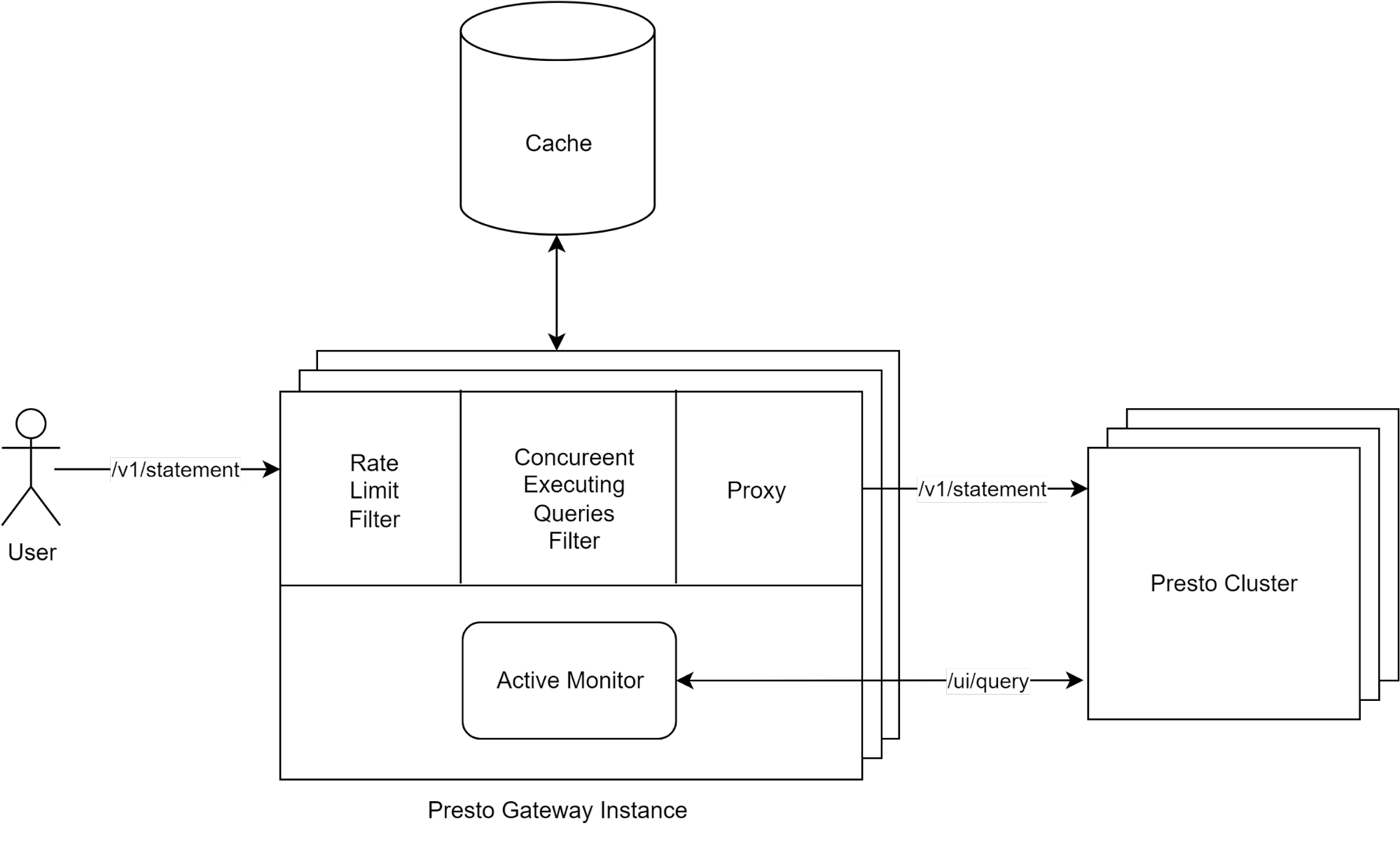 Since individual requests or queries through Presto can have very different execution times, we need to apply another filter on top of the API Rate limiter. This filter will ensure that, if a user is submitting a lower number of requests that are qualified as slow, then that user should not be allowed to execute more than k queries at the same time. This enables  proper governance of users submitting fast queries to execute more queries compared to the one  submitting slow queries.

Cache is the place where we preserve data required by both the filters. For the API rate limiter we need to store timings of submitted requests, while for the second filter, we need information about the number of queries executed on Presto for a user. Considering that we have more than one Presto gateway machine, we need this information to be shared across all machines as AWS elasticache is the selection we made for our implementation.

Presto cluster is the final destination for any submitted request where actual execution happens. 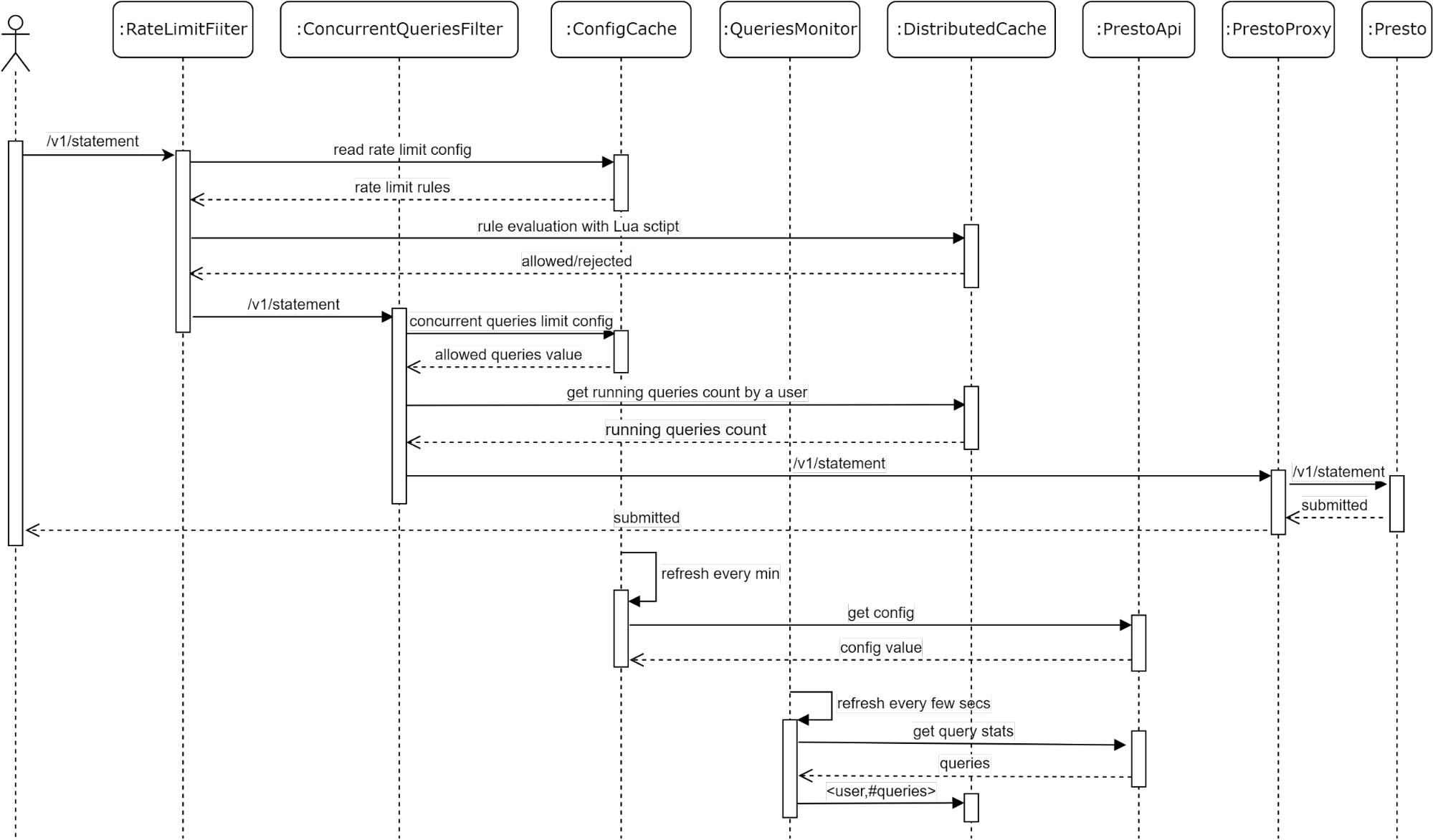 Sequence diagram depicting interaction among various objects. It shows what happens with a request once it is submitted by a user.

The API Rate Limiting filter will ensure that users are not submitting queries in bursts and that they are instead scattered uniformly across time frames. The filter will help to reduce overall load on the Presto gateway controller, which can be a single point of failure.

While API Rate Limiting is efficient and handles large bursts requests, it is completely based on the number of requests in a given time frame. It only considers request count and blocks users from submitting queries in bursts. But considering the behavior of our system where each request or query can have varying execution time, deploying only an API Rate Limiting is not enough. We also would like to consider the duration of the queries. If a user runs heavy queries then we apply another filter in which we restrict users to allow a maximum of k concurrent executing queries.

Filtering rules are given to a service as configuration parameters. Rules can be set by either invoking an API or by directly inserting into MySql database. Configuration can be altered at runtime and it is reflected in the gateway-application  every minute.

Considering the fact that different users or teams will have different Presto usage, we have implemented a mechanism to define rate limiting rules at different granularities. We have also defined priority among them so that user level rule (if available) will be prioritized over global rule.

Priority is defined as below:

We are collecting a variety of metrics to visualize the performance of rate limiting features through dashboards.

A few examples of metrics that we collect are:

Throughout the monitoring setup, we detected that a single user was misusing our API and blocked it accordingly.

By deploying rate limiting features, we were able to ensure optimal resource allocation and reliability of presto resources. Rate limiting also played a crucial role in helping us define better capacity planning along with finer governance of Presto. Rate limiting solutions will also enforce Presto users to plan for their usage.